By: boussole
In: Berlin, Museums
Contents masquer
1 History
2 What can be seen?
3 360° tour of the museum
4 How to get to the museum
4.1 Related posts:

The Bode-Museum, another of the museums belonging to the Museum Island complex, is located at the northern end of the island. The museum was named after its first curator and creator Wilhelm von Bode.

It is a beautiful building, which, with its imposing facade directly on the banks of the Spree, without any land around, gives the impression that the building emerges from the water.

The front facade is rounded, decorated with monumental pillars, windows with decorative borders and arched entrances. The top is adorned with sculptures and a beautiful dome “crowns” the building. Across the street is the Monbijoubrucke Bridge, with its beautiful round lanterns and decorated with crowns at the top.

The Bode-Museum is the fourth museum to be built on the Museum Island and was originally called Kaiser Friedrich-Museum. It was designed in a baroque style by the court architect Ernst Eberhard von Ihne and was built between 1898 and 1904.

Curator Wilhelm von Bode introduced the concept of “rooms by style”, in which paintings, sculptures, furniture and other art objects of the same artistic style were displayed in the same room, which was not common at the time – different types of artworks were displayed separately.

In addition, the details of the interior decoration helped to create an atmosphere in keeping with the art movement and the time of the works’ creation. Wilhelm von Bode’s intention was to take visitors back in time.

During World War II, the building and especially the dome were severely damaged and were gradually restored in the 1950s. In 1956, it was renamed in honor of its first curator, Wilhelm von Bode, and has since housed various collections.

From the late 1990s to 2005, the building underwent further restoration work, and in 2006 the museum was fully reopened.

What can be seen?

Since then, it has displayed the sculpture collection, the Byzantine art collection and the numismatic collection. These collections are also complemented by some paintings, recalling the concept of “pieces by style” introduced by Wilhelm von Bode.

The sculpture collection consists of works from the early Middle Ages to the 18th century and comes mainly from German-speaking countries as well as from France, Holland, Italy and Spain. Italian sculptures are an important part of the collection, as well as German sculptures in the Gothic style.

The collection of Byzantine art in the Bode-Museum is the only one of its kind in Germany. This collection presents art and objects from the Late Antique and Byzantine periods. The objects come mainly from the ancient Mediterranean region, including Italy, Turkey, Greece, the Balkan countries, Egypt, North Africa, the Middle East and Russia.

Among the objects on display are sarcophagi from Late Antiquity and fragments of sarcophagi from Rome, sculptures from the Eastern Roman Empire, ivory reliefs, mosaics, inscriptions, as well as objects of daily life and religious objects from the post-Pharaonic period in Egypt.

The numismatic collection is one of the largest collections of its kind – about 500,000 objects! The collection includes over 100,000 Greek coins, about 50,000 ancient Roman coins, 35,000 Oriental/Islamic coins, 160,000 European coins dating from the Middle Ages to the modern era, and 25,000 medals. There are coins and medals of all types and periods.

There are coins ranging from the beginning of minting in the 7th century BC in Asia Minor to coins of the 21st century. In addition to coins and medals, the collection also features banknotes, historical seals, and various forms of currency used by ancient peoples. Finally, more than 15,000 minting tools and various dies are also on display.

The Bode-Museum is open every day except Monday from 10 am to 6 pm. 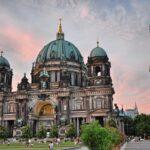