By: boussole
In: Berlin, Neighborhoods
Contents masquer
1 History of the area
1.1 Video
2 How to get to Potsdamer
2.1 Related posts:

The Potsdamer Platz, which is located about 1 km from the Brandenburg Gate and the Reichstag, is a square with bold, super modern buildings and one of the most frequented and visited places in Berlin. In addition to being one of the city’s main attractions, Potsdamer Platz offers many recreational opportunities. You can shop, dine, gamble (there is a casino) or just go to a movie. There is a 3D cinema, which usually shows movies.

History of the area

The square has had this name since 1831, in reference to the Potsdam Gate, which was built a decade earlier and was one of the gates in the Berlin wall at the time that gave access to the city. The gate received its name because it was the gateway to the road leading to Potsdam, a city located about 25 km to the southwest.

The starting point for its development and growth was the construction of the Potsdamer Bahnhof railway station in 1838, which connected Berlin with the city of Potsdam and later with other cities. In 1907, a subway station was opened and, as a result, the neighborhood developed dramatically. Hotels, restaurants, theaters, cinemas, cafés and stores were built here.

In the 1920s and 1930s, Potsdamer Platz was the focal point of Berlin’s daily and nightlife. At that time, it was the busiest transportation and traffic center in Europe. Because the traffic was so heavy, with hundreds of people, cars, carriages, bicycles and streetcars passing by, Berlin’s first traffic light (and one of the first in Europe) was placed on the square on October 20, 1924.

It was a tower, erected in the center of the avenue, with three different colored lights arranged horizontally and not vertically as is the case today. A replica of this tower can be seen on Potsdamer Platz, near the intersection of Potsdamer Straße and Stresemannstraße.

Like most of central Berlin, Potsdamer Platz was severely bombed during World War II and half of its buildings and structures were destroyed. When Berlin was divided into sectors, the square itself became part of the border between the American, Soviet and British sectors.

When the wall was built in 1961, Potsdamer Platz was split in two, and by the mid-1970s all remaining buildings were demolished, turning the square into an empty, deserted “no man’s land.” On the eastern side, it was heavily guarded by East German soldiers to prevent escapes.

With the fall of the Wall, the area, located in the center of the city, became interesting again, attracting various investments. Thus, a new district was built, which took on its current modern appearance.

Some companies have built their headquarters and offices there. And as I mentioned earlier, Potsdamer Platz and its surroundings are also home to a casino, two shopping malls – Potsdamer Platz Arkaden and LP12 – Mall of Berlin, as well as various luxury hotels, restaurants and entertainment options.

About 700 meters from Potsdamer Platz, there is also a long section of the wall, where the exhibition “Topography of Terror” is held. There are also fragments of the Berlin Wall near one of the entrances to the Potsdamer Platz subway station and the Ritz-Carlton Hotel.

If you look at these wall fragments, you will notice that part of it is filled with chewing gum. What’s interesting is that I saw a report talking about certain habits that become traditions and end up becoming an “attraction” on their own. And as an example, they gave these pieces of the wall with chewing gum and another example in Berlin was a post that is in front of a museum, where people stick the museum tickets after the visit.

And near the Sony Center, in the center of Potsdamer Strasse, there is a Walk of Fame, similar to the one in Hollywood, but with stars for German celebrities.

How to get to Potsdamer 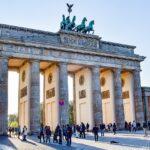 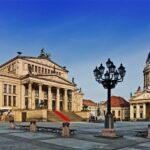 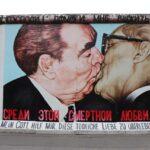