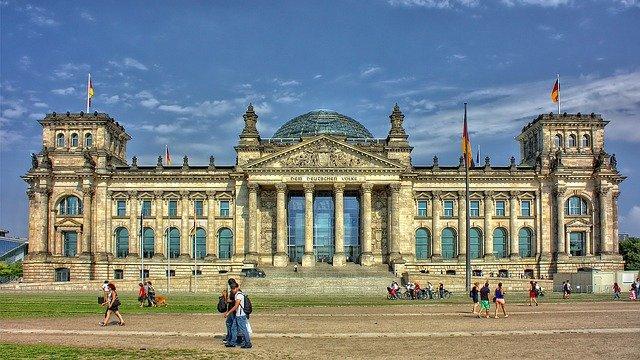 By: boussole
In: Berlin, Monuments
Contents masquer
1 Video
2 How to visit the Parliament Dome:
3 How to get there
3.1 Related posts:

The Reichstag, the building that houses the German Parliament (Bundestag), is one of the most visited attractions in Berlin. Designed by Paul Wallot and inaugurated in 1894, this amazing neo-Renaissance building has monumental dimensions: 137 meters long and 97 meters wide.

The Reichstag building is associated with important moments in German history. On November 9, 1918, the politician Philipp Scheidemann proclaimed the German Republic from one of its windows. In the early hours of February 27-28, 1933, four weeks after Adolf Hitler’s appointment as Chancellor, the building caught fire under mysterious circumstances that have never been clarified. The fire completely destroyed the plenary hall and the dome of the Reichstag. This fire was used as a pretext by the Nazis to begin the persecution of their opponents. On April 30, 1945, after the capture of Berlin, a flag of the Soviet Union was hoisted by a soldier on the roof of the Reichstag to symbolize the victory over the Nazis.

After the Second World War, during the period of separation of Germany, the capital of West Germany became the city of Bonn where the government was transferred.

The Berlin Wall, built in 1961, passed to the east of the building and a visit to the Reichstag terrace, from which the wall could be seen, was usually part of the program of foreign heads of state visiting the city. At that time, the building also housed a museum about the German Parliament and the construction of the Reichstag building.

After the reunification of Germany on October 3, 1990, it was decided that the government and parliament would move from Bonn to Berlin. This led to a new restoration that began in 1995 and was completed in 1999.

British architect Sir Norman Foster’s design added a 23.5-meter-high glass dome over the plenary hall, with a spiral path inside leading to the top, from which you can see the Brandenburg Gate and a beautiful view of the city.

How to visit the Parliament Dome:

The dome and terrace of the Reichstag can be visited for free, but you must book at least two days in advance on the Bundestag website. There are both guided and independent tour options, and if you choose the independent tour, you can get an audio guide (also free) in Portuguese or another language that will tell you about the parliament and other points of Berlin that you will see as you tour the dome.

But for those who haven’t booked the dome tour in advance, there is a container near the Reichstag (next to the Berlin-Pavilion, a restaurant and a souvenir store) where a last-minute reservation can still be made. There is a monitor that shows at which times until the next 2 days there is still availability. This reservation center is open every day from 8am to 6pm from November 1st to March 31st and from 8am to 8pm from April 1st to October 31st. However, there are always long lines, so if you want to visit the dome, it is advisable to make a reservation via the website.

The dome and terrace are open to visitors every day of the week from 8am to midnight, with the last entry time being 10pm. On December 24 it is closed for tours and on December 31 it is closed from 4 pm.

Near the Reichstag are some government administrative buildings, such as the Federal Chancellery, which is the office of the chancellor. People take advantage of the large lawn in front of the Reichstag to relax on warm, sunny days. On those days, you can see people lying down, sitting, playing ball, etc. So here’s a tip if you want to get into the spirit of the Berliners too.